As part of the Desert X international contemporary art exhibition, the second edition of the Desert X AlUla features 15 contextual installations across the Saudi Arabian desert that explore “ideas of mirage and oasis”. This year’s exhibition is curated by Reem Fadda, Raneem Farsi, and Neville Wakefield, under the theme of Sarab (arabic for ‘Mirage’), and invites artists to address the history and culture of the desert, its contemporary significance, and the dichotomy between the natural and man-made world. 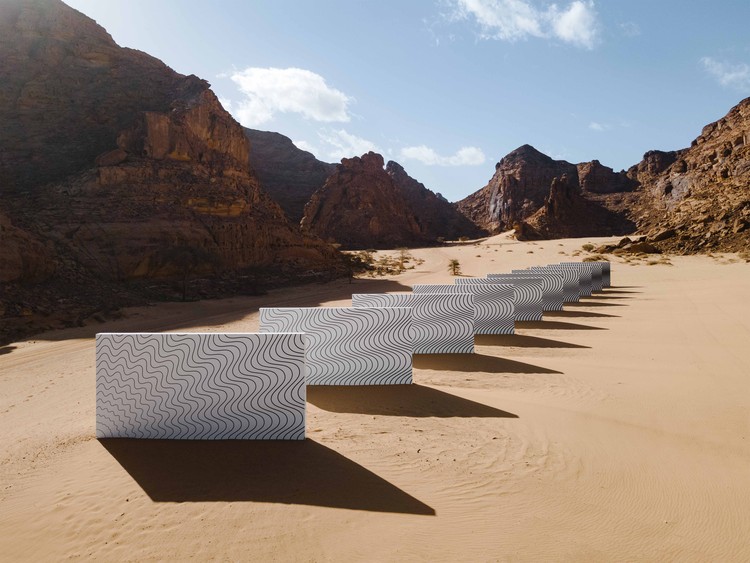 Installed across the Al-Ula desert in the Al Mutadil Valley from February 11th until March 30th, the curators invited local and international artists to consider ancient concepts of the desert, responding with installations that address keywords such as: dreams, camouflage, fiction, dis/appearance, extraction, illusion and myths.

Read on to discover the 15 participating artists, along with their installations.

Alem’s sculptural installation takes inspiration from the art of Origami to create geometric forms that reference to the Arabian mathematics, literature, and mythology.

The installation explores globalization, water, and migration through crafted tapestries draped around slabs of rocks, made from yellow kufour gallons, which are used in Ghana for water storage and transportation.

Coral Alchemy I by Shezad Dawood

The installation explores the relationship between the desert and nearby Red Sea through a pair of coral-like forms. Its temperature-sensitive surfaces reflect the effects of climate change and humans’ struggle to find a sustainable relationship with a rapidly changing ecosystem.

Under the Same Sun by Stephanie Deumer

The artist intersected technology and nature in an installation of an underground greenhouse, hinting at the lush sanctuary of native plants.  Below, solar panels are mounted onto the desert floor, creating an energy feedback loop where the sun’s energy is captured, stored, and transformed through photosynthesis.

The interactive sculpture uses discarded camel skins on an abstract geometric base, resembling a rock formation in the desert.

Measuring the Physicality of Void by Shaikha AlMazrou

The steel-made inflated structures are wedged in the voids of rocks, tensely balanced within the landscape to create a silent yet imposing composition suspended in inertia.

The artist created a mirage of of olive trees, which stand in the desert as living things displaced from their indigenous as an exploration of territory, survival, and citizenship.

The Valley of the Desert Keepers by Ayman Zedani

The soundscape installation sits in a rocky cavern, and comprises horizontal sculptural wires and an audio projection of music, voices, and footsteps, that add to the chimes of nature.

Where the Dwellers Lay by Dana Awartani

The sculpture is inspired by the vernacular architecture of AlUla, mimicking the form of a concave geometric sculpture that references the Nabataean tombs, surrounding mountains, caverns, and rock formations.

A progression of imposing walls are laid out within the natural order of the AlUla canyons, each displaying a section of a larger algorithmic pattern related to the waveforms of the desert.

Angle of Repose by Jim Denevan

The artist created drawings with interlocking patterns that translate the shifts in magnitude and scale of the desert and how humans position themselves within the vastness of unbounded spaces.

The desert kite-shaped mud structure features mirrors on the façade to create the look of a mirage, and an urn-like sculpture embossed with four protective symbols traditionally used on Nabatean tombs.

In Blur by Alicja Kwade

The structures frame the natural artefacts that the artist encountered in the desert. Kwade rearranged and supplemented the linear frames to create constantly changing perspectives that highlight the dichotomy between reality and illusion.

Geography of Hope by Abdullah AlOthman

The piece references theories of light refraction, linking back to the early days of desert civilization, with stainless steel plinths that interact with the light and create a radiant space.

Silent Witnesses of the Past by Monika Sosnowska

The sculpture speaks to AlUla’s historical position as a hub and passage of trade, along with its recent cultural revival. The artist used heritage rails from the Hejaz railway that ran from Damascus to Medina, and transformed them into giant dried grasses that resemble the possibilities of growth and transformation.